On the night of February 6, 1978, a catastrophic nor’easter struck the city of New York. On that night, in a penthouse in the Upper West Side’s stately Apelles, a crowd gathered for a wild party. And on that night, Mr. Albert Haynes Caldwell—a partner emeritus at Swank, Brady & Plescher; Harvard class of ’26; father of three; widower; atheist; and fiscal conservative—hatched a plan to fake a medical emergency and toss himself into the Hudson River, where he would drown.

In the eye of this storm: Hazel Saltwater, age six. The strange events of that night irrevocably altered many lives, but none more than hers. The Blizzard Party is Hazel’s reconstruction of that night, an exploration of love, language, conspiracy, auditory time travel, and life after death.

Cinematic, with a vast cast of characters and a historical scope that spans World War II Poland, the lives of rich and powerful Manhattanites in the late 1970s, and the enduring effects of 9/11, Jack Livings’s The Blizzard Party is an epic novel in the form of a final farewell.

“The Blizzard Party feels like a life’s work, as if the author managed to include every keen observation, poetic rumination and theory of humanity he’s ever had. This is a good thing because Livings’ observations, ruminations and theories manage to be both satisfyingly recognizable and thrillingly original.” ―Samantha Schoech, THE SAN FRANCISCO CHRONICLE

“[A] raucously inventive tale of loss and erasure told with an authorial assurance uncommon in a first novel . . . [Livings] is a nimble wordsmith . . . This rollickingly bleak rendering of 1970s New York is well worth a visit.” ―JOHN FREEMAN GILL, THE NEW YORK TIMES BOOK REVIEW

“[A] brilliant debut novel . . . Livings calls to mind the work of Michael Chabon as he brings insight into the way events and circumstances shape his characters’ lives. This is one to savor.” ―PUBLISHERS WEEKLY (starred review)

“[A] first novel that might be called a detour de force: sprawling, discursive, loose-limbed (and impressive) . . . Livings’s nearest model may be the doorstop-sized novels of Tom Wolfe . . . and this book is similarly digressive, maximalist, and prone to old-fashioned manipulations of sentiment. Livings may not quite have Wolfe’s journalistic chops, but he’s a far more skillful and empathetic novelist, and what seems moralistic and preening in Wolfe’s books reads here mostly as playful and nimble . . . One may wonder why a first-time novelist in 2020 would follow the Wolfe/Balzac template for the Novel of Everything . . . but the fact is that Livings, amazingly, pulls it off. An exuberant, everything-and-the-kitchen-sink pleasure.” ―KIRKUS REVIEWS (starred review)

“[An] ambitious debut . . . [The Blizzard Party] features moments of brilliance, especially in the dialogue and the surprising connections. A literary feast.” ―BOOKLIST

“Written with elegance and verve, The Blizzard Party reminds us of just how powerful a novel can be, capable of transporting us through time, immersing us in others’ minds and memories, conjuring historical worlds with shocking immediacy, and interrogating the very act of storytelling itself. Jack Livings makes the leap from short story virtuoso to novelist with his gifts of invention, language, and observation all gloriously intact.” ―Sarah Shun-lien Bynum

“With his merciless eye, crackling prose, and incomparable storytelling, Jack Livings casts a fictional spell from the first page of this novel to the last. Delivering a surfeit of pleasure even as it pierces the reader’s heart, The Blizzard Party is a shimmering pearl formed around a heartbreaking grain of sand.” ―Antoine Wilson

“Jack Livings’ spectacular debut novel, The Blizzard Party, is a testament to how life, like time, can defy the convenient order of beginning, middle, and end. In these pages, characters grapple with who they were and who they might become, their lives looping back on themselves, zeroing in on chance meetings and lifelong bonds, on small victories and unspeakable loss. Like the blizzard of ’78, this is an epic story that swirls and drifts, finally settling into what might well be the truth: ‘We do live in the past and future simultaneously, don’t we?’ Masterfully constructed, exquisitely written, and brought to life by unforgettable characters who will break your heart, The Blizzard Party is an absolute marvel of storytelling.” ―Lysley Tenorio 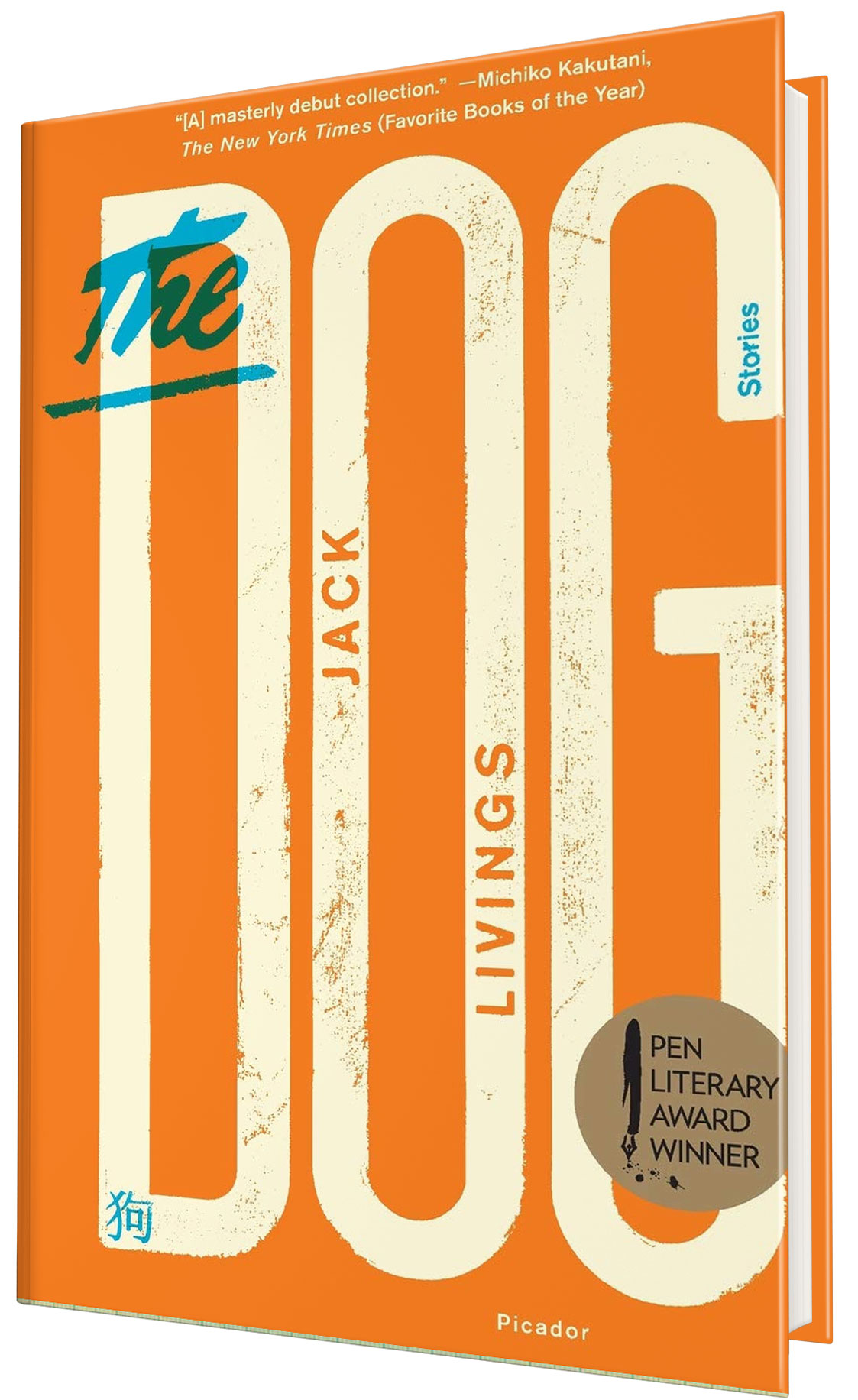 Set in the shifting landscape of contemporary China, this riveting, richly imagined collection explodes the country’s cultural and social fault lines, revealing a nation accustomed to bitter struggle and the stranglehold of communism as it confronts a generation rife with the promise of unforeseen prosperity.

A wealthy factory owner—once a rural peasant—donates repeatedly to earthquake relief efforts, but digs in his heels when government pressure requires him to give even more; a marginalized but powerful Uyghur gangster clashes with his homosexual grandson; and a dogged journalist is forced to resign as young writers in “pink Izod golf shirts and knockoff Italian loafers” write his stories out from under him. With spare, penetrating prose, Livings gives shape to the anonymous faces in the crowd and illuminates the tensions, ironies, and possibilities of life in modern China. As heartbreaking as it is hopeful, The Dog marks the debut of a startling and wildly imaginative new voice in fiction.

“Stunning . . . In The Dog, Mr. Livings demonstrates his virtuosity as a storyteller, his ability to immerse us instantly in the lives of his characters, to conjure the daily reality of the very different worlds they inhabit . . . [he] writes less as an outsider, observing the exotic customs and traditions of a foreign land, than as a sort of Chekhovian observer, attuned to the absurdities and ironies of his characters’ lives . . . Together, his tales open a prismatic window on China, showing us how part of the country is rushing to embrace the 21st century, even as its history continues to exert a magnetic hold over people’s thinking and expectations . . . With The Dog, Mr. Livings has made an incisive—and highly impressive—debut.” ―Michiko Kakutani, THE NEW YORK TIMES

“[An] impressive collection . . . The prose in The Dog is crisp and forceful, honed by a journalist’s eye for sharp detail.” ―Sam Sacks, THE WALL STREET JOURNAL

“[Livings] is unusually perceptive about political realities and the moral cost they exact from ordinary citizens.” ―THE NEW YORKER

“A forceful argument for the role of imagination in fiction and in life. . . The Dog is a book of extraordinary power.” ―Jonathan Lee, THE GUARDIAN

“An arresting debut collection of short stories, with prose that is tight and compact and stories that are raw and honest.” ―Melanie Ho, ASIAN REVIEW OF BOOKS

“Exceptional . . . A poisoned world, with ruthless people, apparatchiks, Stakhanovites, rude, cruel, anxious chancers, and all subtly alien, quite without the American gene.” ―Michael Hofmann, THE TIMES LITERARY SUPPLEMENT (A Best Book of the Year)

“Jack Livings’ stories of China are marvels of the imagination. Rendered in such precise and exquisitely observed detail, they read like directly reported dispatches from the tragic, ruthless, beset, nearly hopeless hearts of the souls of Beijing. It is Livings’ genius, though, to know that nearly hopeless is not the same thing as hopeless. What gives these stories their dark, upsetting grandeur is in every case the luminosity of hope, no matter how fragile, how vulnerable, how very nearly extinguished.” —Paul Harding, author of Tinkers and Enon

“These stories, one after another, accomplish that miraculous great-fiction trick—taking you to places you’ve never been and can’t otherwise go, making the exotic familiar and and the ordinary other-worldly, getting you inside the heads of compelling people who seem absolutely real, and do all that in impeccably prose while telling excellent tales that are by turns witty and scary and wise. Jack Livings is a superb and singular writer.” —Kurt Andersen, author of True Believers and Heyday

“In prose that is at once unadorned and poetic, with a Chekovian tenderness for even his most corrupt characters, Jack Livings presents us with a startling new portrait of contemporary China. Ruthless and compassionate in its depiction of social, cultural, and familial injustice, this is raw, vital storytelling from a voice we cannot afford to ignore. I predict that The Dog will be read and studied alongside the stories of Joyce and Cheever, Faulkner and Carver. Listen up, America: we need this book.” —Jamie Quatro, author of I Want to Show You More